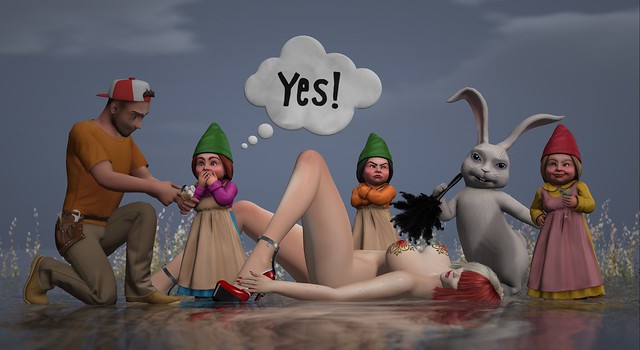 Or if I was just that little bit ruder, I would have yelled … “turn the f..king camera around you great twat”!! 😀

Anyway, while we wait for Mister Fixit to get his act together, please read on below for all of my worn bits and other salacious details.

MINA Hair – Audrie (unrigged) … made by Mina Nakamura.
This very straight hair which can be worn as a two-tone, was available at the Fetish Fair 2018 event, which finished its short run on February 16th. NEW.

Mutresse-Power-Mr FixIt … made by Eeky Cioc. I have altered this prop by detaching part of it (a power board) and then adding a small camera for him to hold rather clumsily in his hands. The camera itself was made by Winter Thorn.

Mutresse-Maid-Helpful Bunny … made by Eeky Cioc. This rabbit is part of the Helpful Bunny set which will be available at the next round of The Arcade Gacha, which starts on March 1st, 2018. NEW.

The pose that I have used is Pose It-On the Floor … made by Sirenity Soon.