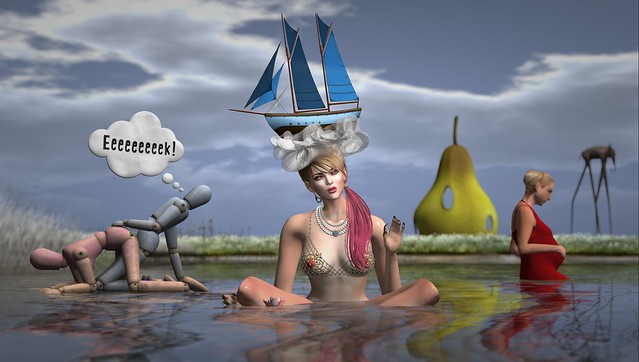 Well … I’m not James and that’s not a giant peach behind me either!! 😀

As for my fashion details, please read on below.

MINA Hair – Mabel … made by Mina Nakamura. I am wearing this hair in a tone from the Dip Dye pack. This hair will be available at the next round of Uber which opens on February 25th, 2018. NEW.

[IK] Naughty Dummies – The Ship … made by Dagger Rainier.

YO_V.woman pregnant 001 … made by marissayo Resident. Purchased on Second Life MarketPlace in February 2018 for a mere 85 lindens – a bargain, methinks!!
MESH PEOPLE -YO_V.pregnant

The other objects in this picture are part of the Elvenshire SIM background but you can purchase the Daliesque elephant on Second Life MarketPlace, here:
22769 ~ [bauwerk] Un voyage a Dali

The pose that I have used is Kirin – Daisy Pose 3 … made by Carolina Sautereau. This is part of a Daisy Pose Pack which I originally purchased at The Secret Hideout event in May 2017.
Now available on Second Life MarketPlace:
Kirin Poses – Daisy Pose Pack