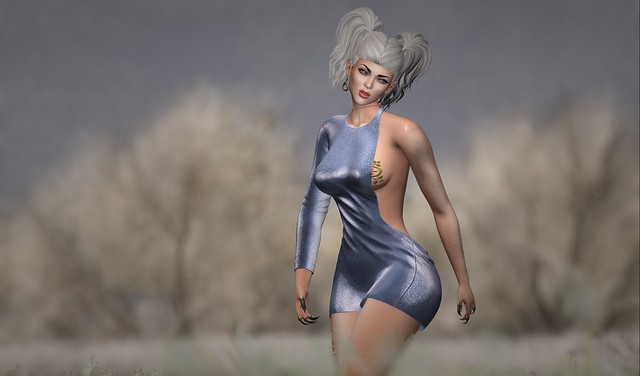 MINA Hair – Maddie (unrigged) … made by Mina Nakamura.
As the style notes say, “Maddie is an unrigged ponytail hairstyle. Wear it in one colour or playfully choose two colours in the hair”. Maddie is available at the current round of KUSTOM9, which is open from February 15th through to March 10th. NEW.
KUSTOM9

Giz Seorn – Gwyneth Dress [Fatpack] Maitreya Lara … made by Giz Seorn.
This gorgeous dress which has er, ample amounts of side boob, is available now at the current round of the Cosmopolitan Event, which finishes on February 24th. I am wearing the dress in one of the glittery tones that are available as exclusive extras with the Fatpack purchase. NEW.
Cosmopolitan Event