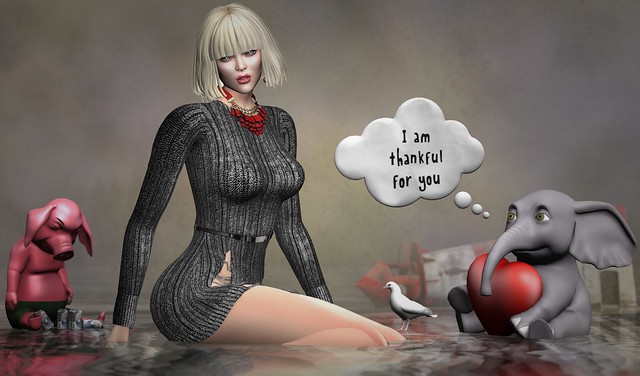 Well at least my new pachyderm friend stayed sober – unlike the pig on my left!!

As for fashion details and more, please read on below for the lowdown on my kit and props.

Giz Seorn – Charlize Dress [Silver] Maitreya Lara … made by Giz Seorn.
The Charlize dress is available now at the current round of Shiny Shabby, which is finishing very, very soon (February 15th to be exact). And yes, the dress does have some “frayed” bits on both sides at the front – but the wonderful stitching by Giz has kept this all together and spared us all from some embarrassing moments. 😀 NEW.
Shiny Shabby – Giz Seorn

Peace Dove (FOR LAND) … made by JubJub Forder.

[ free bird ] Thanksgiving Thought Bubble – Thankful for You … made by Cortez Brandriss.