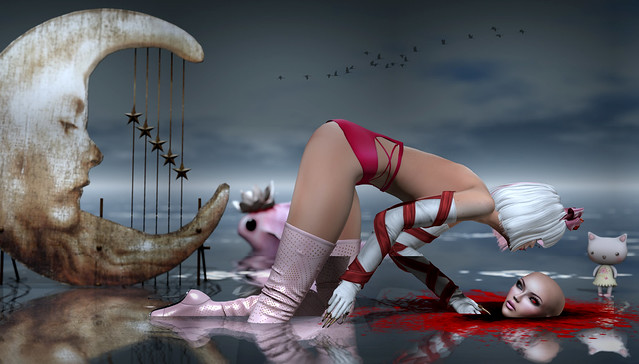 And with this kiss you shall be reborn … I hope!! 😀

Meanwhile, totally alive (and adorable) Alles is decked out in this beautiful kit.

*katat0nik* (pink) Valentine Bow … made by Katat0nik Pidgeon. Purchased at the latest round of SaNaRae, which is open from January 26th until February 18th. NEW.
SaNaRae

MINA Hair – Audrie (unrigged) … made by Mina Nakamura. I am wearing this rather Sia-like hair in two tones courtesy of the All Colors Fatpack where the HUD has separate color options for the left side and the right side of the hair. This hair will be available at the upcoming round of Fetish Fair, which begins on February 2nd. NEW.

UC_Glory_all in 1_L_glove_Bento_Maitreya … made by unitedcolorsteam Resident.
UC_Glory_all in 1_R_glove_Bento_Maitreya … made by unitedcolorsteam Resident.
The Glory gloves (and an accompanying top) are available now at the current round of Uber, which is open from January 25th through until February 22nd. NEW.
Uber

*EB* Panty -Fuschia – “Anne” – Maitreya Lara … made by Elagantia Resident. Purchased at the latest round of the Cosmopolitan Event, which is open from January 29th through until February 10th. NEW.
Cosmopolitan Event

[Gos] Rihanna Perforated Boots – Materials [lara] … made by Gospel Voom.
I am wearing these boots in a tone from the Boutique pack – which is one of three packs that are on sale. Purchased at the very latest round of Uber, which is open from January 25th through until February 22nd. NEW.
Uber

The pose that I have used is Di’s Opera – subspace 5 … made by Di Hoorenbeek. However I did make significant alterations to this pose by using my Animare HUD. Purchased as part of a Subspace set at the July 2016 round of the ROMP event but this set may be no longer available.