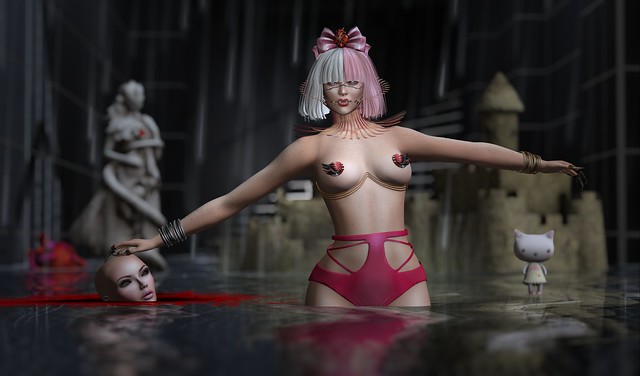 My blog title? Well as any Sia fan out there would and indeed should know, it’s the title of her sixth studio album of course!! 😀

And this is what Alles is wearing … including and apart from the hair.

*katat0nik* (pink) Valentine Bow … made by Katat0nik Pidgeon. Purchased at the latest round of SaNaRae, which is open from January 26th until February 18th. NEW.
SaNaRae

MINA Hair – Audrie (unrigged) … made by Mina Nakamura. I am wearing this rather Sia-like hair in two tones courtesy of the All Colors Fatpack where the HUD has separate color options for the left side and the right side of the hair. This hair will be available at the upcoming round of Fetish Fair, which begins on February 2nd. NEW.

– shanghai – Empire Collar Bronze … made by ShanghaiSL Resident. Purchased at the latest round of SaNaRae, which is open from January 26th until February 18th. NEW.
SaNaRae

*EB* Panty -Fuschia – “Anne” – Maitreya Lara … made by Elagantia Resident. Purchased at the latest round of the Cosmopolitan Event, which is open from January 29th through until February 10th. NEW.
Cosmopolitan Event

heart on a plate with blood 10 prims … made by Lloksa Resident.