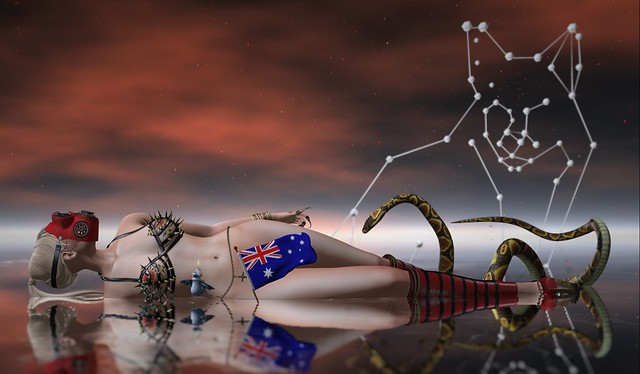 Cos we can’t stay tied to Great Britain’s apron strings any longer in the 21st Century.

Tableau Vivant \\ Nora hair … made by M4ri1yn Magic. Alles is wearing this ponytail in a tone from the Blonds pack. Available now at the very latest round of Uber, which is open from January 25th through until February 22nd. NEW.
Uber
OR
Harajuku – Uber Cam Shopping SIM

BLUDSHOT – Studded Harness Bra – Black & Gold (Maitreya) … made by (rxde Resident. Purchased at the latest round of the Cosmopolitan Event, which is open from January 15th through until January 27th. NEW.
Cosmopolitan Event

[ free bird ] Windy Day Flag – Australia … made by Cortez Brandriss. This is a Modify object, so I reduced it considerably in size but still left it big enough so that it would provide adequate cover for my “map of Tassie”! 😀

The pose that I have used is -slouch- pose223 … made by Eira Juliesse. However this pose was loaded into a pose stand which I then tilted at about ninety degrees, so that I lay horizontally in the scene rather than standing upright. Unfortunately -slouch- poses are no longer available inworld or on Second Life MarketPlace as the creator seems to have exited from our virtual domain.