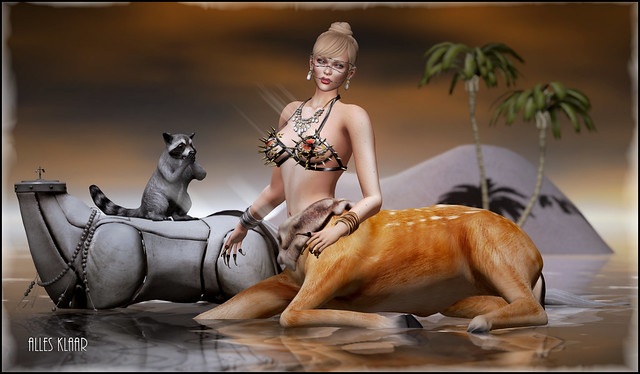 Baiastice_Venice G.G. Jewelry Set-Necklace … made by Sissy Pessoa.
This is a gacha item on the Venice Gran Gala gacha at the latest round of The Epiphany event, which is open from January 15th through until February 12th, 2018. This prize is part of the same set as the Jewelry Set earrings. NEW.
The Epiphany

BLUDSHOT – Studded Harness Bra – Black & Gold (Maitreya) … made by (rxde Resident. Purchased at the latest round of the Cosmopolitan Event, which is open from January 15th through until January 27th. NEW.
Cosmopolitan Event

Tentacio & .{PSYCHO:Byts}. Childrens of Diana RARE … made by psikotik Gothly. This is the deer body that adorns my lower half. NEW.