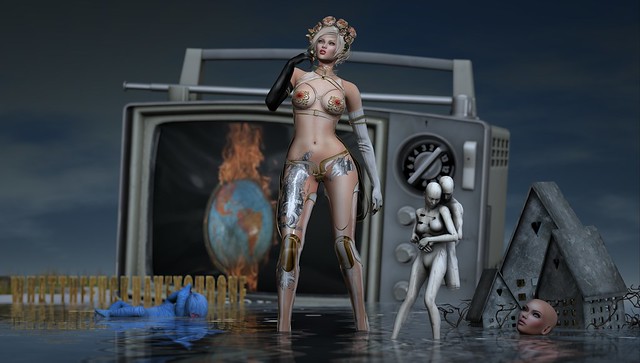 *LODE* Head Accessory – Juliet [peach] … made by Chirzaka Vlodovic.
This is a common gacha “prize” on the Juliet Collection Gacha at the latest round of The Chapter Four, which is open from January 4th through until February 1st. NEW.
The Chapter Four

Tableau Vivant \\ Gia hair … made by M4ri1yn Magic. I am wearing this cute short hair in a tone from the Blonds pack. Available now at the current round of KUSTOM9, which is open from December 15th, 2017 through until January 10th. NEW.
KUSTOM9

*YS&YS* Pris VAMP Skin Applier – Lelutka BENTO Head … made by Monyka Benelli. This was purchased at the November 2017 round of We Love Role-Play.
NB: This was only applied as a tattoo layer to my lower body which gives it the metallic sheen.

And lastly, the pose that I have used is (Alles draws breath), Bauhaus Movement – Gritty Beats_//-No Relief 49 … which is made by LouLou Teichmann. You can buy this pose individually or as part of a FatPack at the latest round of The Liaison Collaborative event, which is open from January 7th through to January 30th. NEW.
The Liaison Collaborative