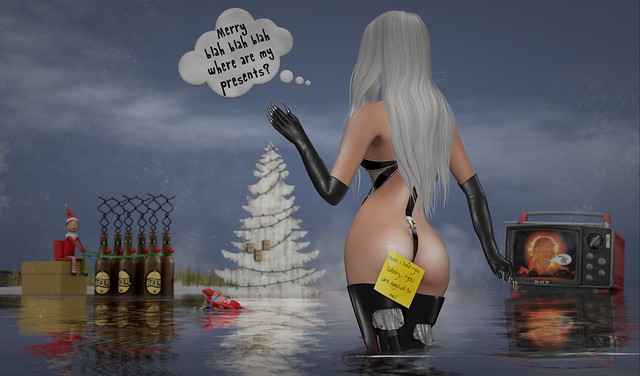 Featuring Alles Klaar in her alternative role as Tyfanwy Trump, the oft-forgotten Welsh-born daughter of El Presidente Donald Trump, who – like all of the members of her oafish clan – is as selfish and self-centred as they come!! 😦

As for Tyf’s fashion details, please read on below.

Persefona Doll Shape … made by Persefona Resident. Tyf has tweaked this shape by making her shoulders wider and her head bigger. Purchased at the current round of the Cosmopolitan Event, which is open from December 4th to December 16th. NEW.
Cosmopolitan Event

r2 A/D/E kagura1[black]Maitreya … made by rei2 Aya. The kagura outfit – Tyf is just wearing the bodysuit here – is available at the current round of Collabor88, which is open from December 8th through until January 6th, 2018. NEW.

[ Lucky #7 ] Post-Me: you are special … made by Shortcake Sugarplum.
You can purchase a complete set of Post-Me notes – which can either be rezzed or worn on your body – on Second Life MarketPlace. Available here:
Post Me Notes

The props that Tyf has used are as follows:

WhiteChristmas Gacha – tree … made by Banana Mellow.
This is a gacha purchase or “win” that Alles made at the latest round of The Imaginarium event, which is open from December 1st through until December 31st. NEW.
The Imaginarium

The pose that Tyf has used is [X] I am a diva 1 … made by Xerys Resident. However Tyf slightly modified the pose using an Animare HUD – her left arm was moved off her hip and then the lower arm was raised.