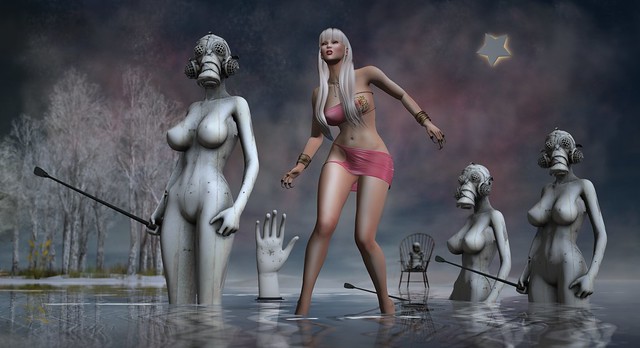 Cos it’s the only way to stop the global catastrophes that a few bad men will lead us into if they’re not restrained.

Alles is wearing the new United Colors dare bra + skirt that is available now at the Kink(Y) Event.

UC_I_dare_outfit_pink_Maitreya … made by unitedcolorsteam Resident. Available now in eight different colours and in fits for Belleza and Slink as well, at the monthly Kink(Y) Event, which is open from November 28th through to December 19th. NEW.
Kink(Y) Event

Avro’ cura di te ….(mask) by Mistero Hifeng … made by Mistero Hifeng. This is a COPY item which you can modify by using a resize menu – so I was able to rezz three of these rather spooky sculptures. Purchased at The Crossroads Event, which is now defunct, in April 2017.