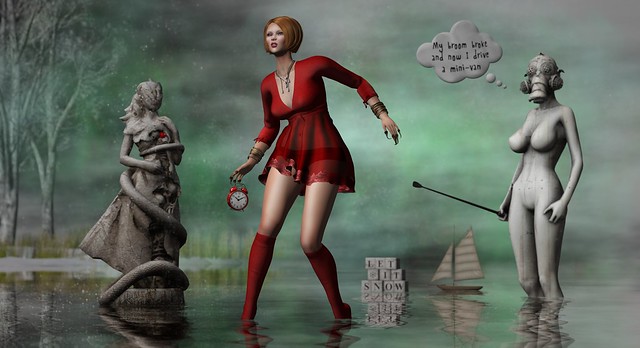 As for my worn details, Alles is kitted out in this fabulous style.

Tableau Vivant \\ Karen … made by M4rilyn Magic. I am wearing this short bob-like hair in a tone from the Reds pack. Available now at the Kink(Y) Event, which is open from November 28th through until December 19th. NEW.
Kink(Y) Event

AF Ralph’s Boat … made by Apple Fall (aka warehousefifteendesigns Resident). This cute object is Copy/Modify and was purchased on Second Life MarketPlace in March 2015 for a mere 125 lindens. This version of the boat has been used at slightly larger than its original size.

The nice girl on my right is Avro’ cura di te ….(mask) by Mistero Hifeng. Which translates from Italian as “I’m going after you”.