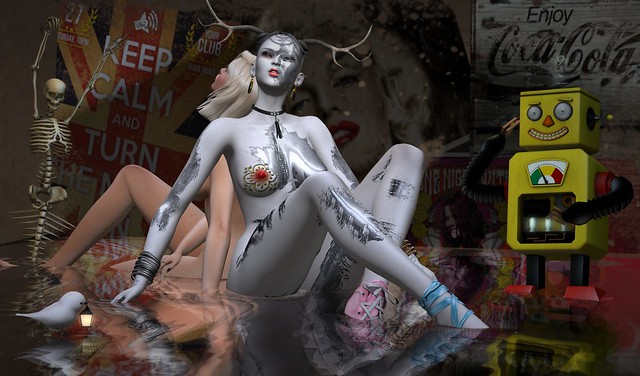 Well, I hope she does cos who would want to have a glitter-daubed skeleton exposing himself right next to you? 😦

As for our worn details – which is the whole purpose of this blog after all – please read on below.

LARA – on the left – is wearing the following:

Tableau Vivant \\ Louie hair – Basics … made by M4ri1yn Magic. This hair was first available at the October/November 2016 round of KUSTOM9 but can now be purchased

*YS&YS* Pris VAMP Skin Applier – Lelutka BENTO Head … made by Monyka Benelli. Purchased at the latest round of We Love Role-Play, which is open from November 4th until November 30th. NEW.
We Love Role-Play

: CULT : Sneaks and Ballet … made by Cultxx Resident. This is a pair of shoes with a very quirky feel as one shoe is a sneaker and the other is a ballet slipper – and then by using the included HUD you can make each shoe a different colour as well. Purchased at the most recent round of KUSTOM9, which sadly finished on November 10th but these wonderful shoes can now be bought instore. NEW.
: CULT : @ Raven Wood

MERMAID_NECKLACE_Skeleton Only … made by Sissy Pessoa. This is meant to be a necklace but I rezzed it and made it huge so that I could use it as a prop.

02 MI Tin Robot Yellow 2 [3 LI] … made by Karthikeyan Engineer.
This is a common gacha prize on the Tin Robots Gacha at the current round of The Gacha Garden event, which is open from November 1st until November 30th. NEW.
The Gacha Garden