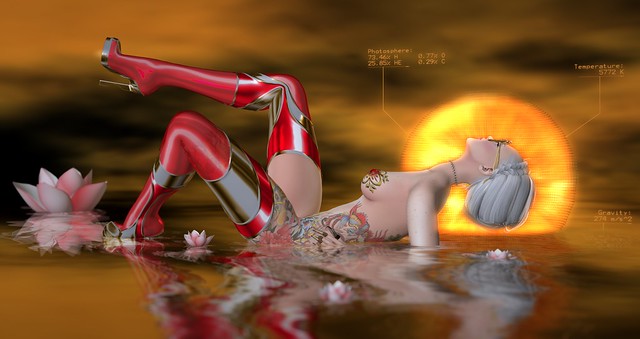 And because it’s so darned hot, Alles is wearing barely anything of course!! 😀

However these are my worn details, such as they are!

Tableau Vivant \\ Braidy (updo) … made by M4ri1yn Magic. This is one of the “Braidy Bunch” hairs that are available as a gacha prize at the latest round of The Epiphany event, which is open until November 15th.
The Epiphany

Pure Poison – Opulence Sunglasses … made by Shaleene Kenin. These were first available at the January 2015 round of the Uber event but can now be found and purchased on Second Life MarketPlace.
https://marketplace.secondlife.com/p/Mabelle-Mesh-Glasses-Red/7260003

r2 A/D/E kanna pasties[red]Maitreya … made by rei2 Aya.
The kanna outfit – I’m wearing pasties and boots this time – is available now at the current round of Collabor88, which finishes on November 6th. NEW.
Collabor88

.Identity. Body Shop – Reborn Wild [Fresh] tattoo … made by Melissa Hindrabar. Purchased at the Kink(Y) Event, which is open from October 28th through until November 19th. NEW.
Kink(Y) Event

~isil~ Planetarium Hologram (Sol) RARE … made by Isilmeriel Resident. This very cool item was a “prize” from the ~isil~ vendor at the December 2016 round of The Arcade Gacha, however you can now play the Planetarium Holograms gacha instore.
Isil Designs Main Store @ Mururoa Atoll