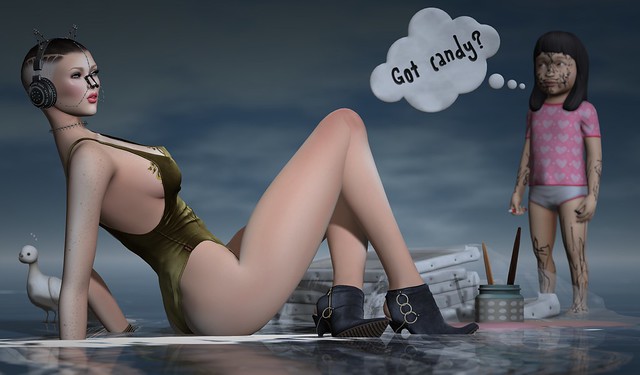 Actually I can’t draw or paint to save my life but I’m always happy to give others a hand so when one of my “Mutresse” children asked me to pose for her, how could I honestly resist? Unfortunately the little dear had already been playing with some textas when she arrived … and feeling somewhat sheepish, she asked me if she could have a treat. Oh dear, I guess Halloween is coming early this year!! 😀

As for my fashion details, Alles is wearing this groovy kit!

AZOURY – Daphne Headphone Black [Modif&Copy] … made by Aniki Seetan.
This intriguing item is available at the latest SaNaRae event, which is open from September 26th until October 18th. NEW.
SaNaRae

MINA hairbase HUD – Myla – Lelutka … made by Mina Nakamura.
The very cool Myla hairbase and an accompanying Myla hair were available at the Thereafter event, which was open from August 17th to August 27th. NEW.

[VALE KOER] SIDEVIEW BODYSUIT MAITREYA … made by Bob Resident. I splurged and bought the fatpack of this sexy wearable at the latest round of the Uber event, which is open from September 25th until October 22nd. NEW.
Uber

Baiastice_Lennox Booties-All Colors-Maitreya … made by Sissy Pessoa.
The Lennox Booties are available now at the Shoetopia event, which is open from September 25th through until October 15th. NEW.
Shoetopia

*MishMish* White Peacock – The Dazzle – stand1 … made by Aime Takaaki.

Soy. Covered canvases with vinyl … made by Soyoy Resident.

LISP – Mesh – Jam Jar of Paintbrushes … made by Pandora Popstar.

Mutresse-Artist-Just Kids … made by Eeky Cioc. This is a common prize for Mutresse at the latest round of The Arcade Gacha, which finishes soon on September 30th. NEW.
The Arcade Shopping Guide – September 2017

The pose that I have used is shelter 03 … made by Connie Stratten. Mien Poses is currently have a big sale at the moment which runs from September 16th through until October 1st.
.mien. poses @ The Pea