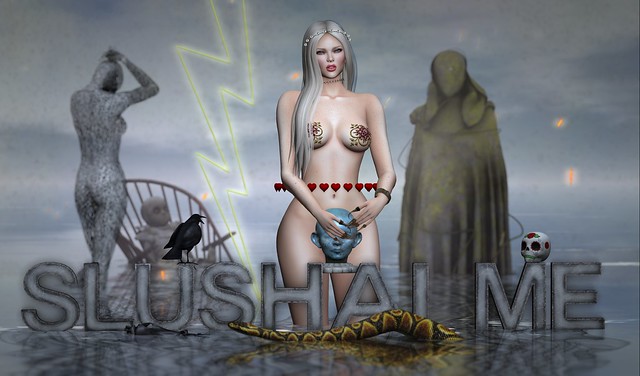 And I do hope that you have been listening because now you can read all my blog details about what Alles is wearing and more in the paragraphs below.

Tableau Vivant \\ Lucy [S] … made by M4ri1yn Magic. I am wearing this very straight hair in a tone from the Blonds pack. Available now at the current round of KUSTOM9, which is open from September 15th through until October 10th. NEW.
KUSTOM9

uK – Mystic Dew Mist Gold … made by Poe Rozenberg.
Purchased at the May/June 2017 round of the Whimsical event.

[ keke ] nirvana . mind … made by Kean Kelly. This is the small blue head that I am holding directly in front of my nether regions – as one should. Purchased as a deco item at the latest round of Shiny Shabby, which is open from September 20th until October 15th. NEW.

And lastly, the pose that I have used is .mien. {my sweet friend} 05 … made by Connie Stratten. Mien Poses is currently have a big sale at the moment which runs from September 16th through until October 1st.
.mien. poses @ The Pea