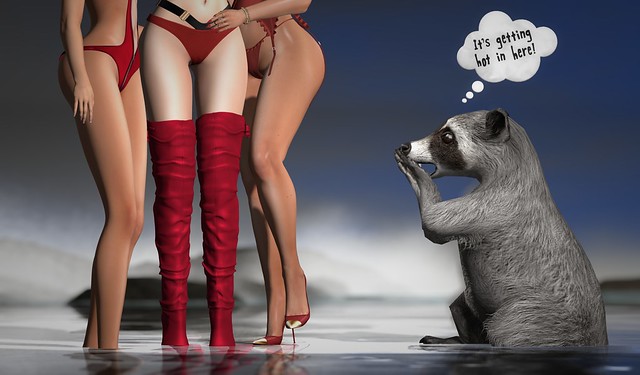 Isn’t it funny how a raccoon is so easily shocked? Hehe!! 😀

LARA – on the left – is wearing these items:

ALLES – in the middle – is wearing these items:

Atelier Pepe – Strappy Bikini – Black/R (Maitreya) … made by pepehair Resident. Purchased at the previous round of Uber, which finished on September 23rd. NEW.

Baiastice_Blade OTK Boots-All Colors-Maitreya … made by Sissy Pessoa.
The Blade Boots are available now at the Shoetopia event, which is open from September 25th through until October 15th. NEW.
Shoetopia

SIYA – on the right – is wearing these items:

The three-person pose that we used is The Owl. Entwined … made by LiFetisova Resident. Purchased at the July/August round of Shiny Shabby.