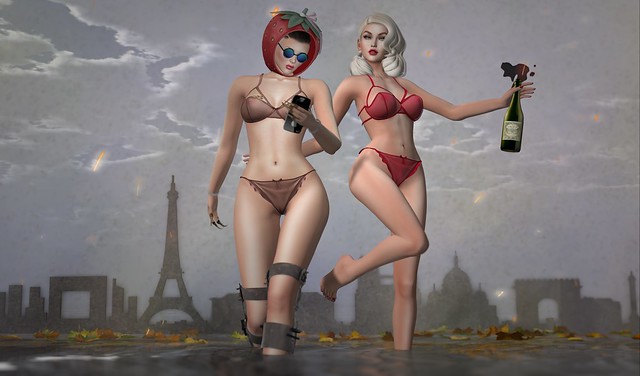 Or so it seems!! Alles is looking worriedly at her smart phone and thinking “we must be in Paris by now”? Perhaps someone should tell her that it’s right behind you!! 😀

*katat0nik* (red / bow) Strawberry Hood … made by Katat0nik Pidgeon. Purchased at the current round of Collabor88, which is open September 8th until October 6th. NEW.
Collabor88

Baiastice_Paris Plain Lingerie-Bronze-BRA-SHEER-Maitreya … by Sissy Pessoa.
Baiastice_Paris Plain Lingerie-Bronze-PANTIES-SHEER-Maitreya … made by Sissy Pessoa.
The Paris Lingerie is available now at the Frou Frou event – which is a very sexy newcomer on the grid. Frou Frou is open from September 10th to October 10th. NEW.
Frou Frou

We used two single poses to make this picture. The pose that Alles has used is Bauhaus Movement – Digital Alchemy 41 … made by LouLou Teichmann, while Elemiah’s pose is Le Poppycock-Sunlight’s music … made by Olivia Lalonde.