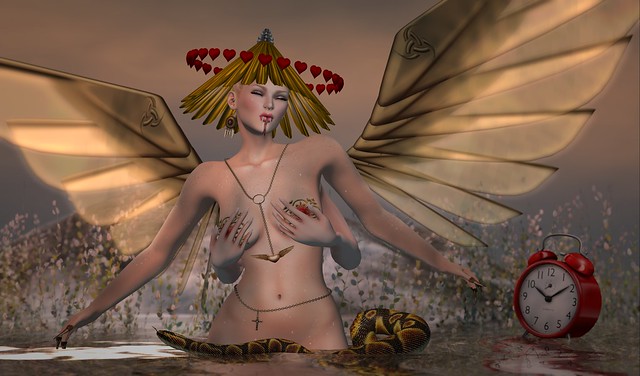 As for my worn kit – such as it is – Alles is decked out in the following:

Alured Hat … made by Zib Scaggs.
Purchased at the debut round of the 4Mesh event (formerly Mesh Body Addicts) which is open from September 12th until October 1st. NEW.
4Mesh

Meva Lona Earring Right Gold … made by Mea Carnell. NEW.
The various Lona items from Meva are available now at the September 2017 round of We Love Role-Play, which is open from September 4th until September 30th.
We Love Role-Play

+ Kali Embrace Arms V2 + {aii} … made by PrincessAii Resident.
The Kali Embrace Arms actually come in a set with four different pairs of arms but as they are Copy + Modify, I rezzed the four pair set beforehand and then unlinked the different pairs so that all I had left to use was the pair that were clasped over my breasts. I then added them to my Maitreya Lara body and tinted them … as best I could. Purchased at the Aii – The Ugly & Beautiful Mainstore just today.
Aii The Ugly & Beautiful @ Mai Tail (Outfits & Accessories)

The pose that I have used is Le Poppycock-Child’s play … which is made by Olivia Lalonde. This pose is part of a larger set called Le Poppycock *Hello Day* B that was purchased inworld just a few days ago.
Le Poppycock @ Nymphai