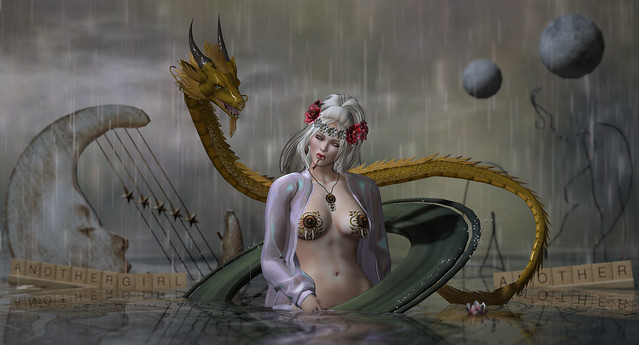 DevilAii Resident from Aii – The Ugly & Beautiful has produced a wonderful array of Chinese dragons for the September round of The Arcade Gacha, which are great value at 75 lindens a play. Each one has an added pose that you can use or you can simply attach them and let them writhe sensually about your virtual body!! 😀

As for my worn kit in total, Alles is wearing the following.

*LODE* Head Accessory – Plastic Fantastic Wreath [passion] … made by Chirzaka Vlodovic. Purchased at the most recent round of Collabor88, which finished on September 6th. NEW.

Tableau Vivant \\ Rossella hair [common] … made by M4ri1yn Magic. This is a common prize for Tableau Vivant at the latest round of The Arcade Gacha. NEW.
(NB: I am wearing this hair in a tone from the Blonds pack.)
The Arcade Shopping Guide – September 2017

#11 Golden Dragon {egosumaii} … made by PrincessAii Resident. This is a common prize on the Fierce Dragon Brothers gacha for Aii – The Ugly & Beautiful at the September 2017 round of The Arcade Gacha. NEW.
The Arcade Shopping Guide – September 2017

ISON – plastic bomber jacket -maitreya- (holographic) … made by Harry Hyx. Purchased at the most recent round of Collabor88, which finished on September 6th. NEW.

PILOT – Wire Woman 1 [Black] … made by Kaz Nayar. Purchased at the most recent round of Collabor88, which finished on September 6th. NEW.

And lastly, the pose that I have used is Le Poppycock-In your head … made by Olivia Lalonde. This pose is part of a set called Le Poppycock *Solid Gold* B that was purchased at the June 2017 round of The Chapter Four.