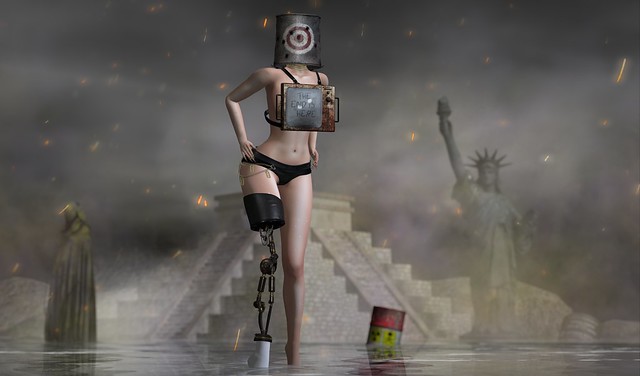 Cos it’s always better to get your apocalypse out of the way, isn’t it?

As for my fashion details, Alles is wearing the following kit.

LeLutka.Alpha.Head … made by Nyx Linden.

[ west end ] Limited Shapes by Beloved Ruby (copy/modify) … made by Beloved Ruby. And slightly modified by me so that my shoulders are wider – set @ 56.

AZOURY – Barthelemy Copper [Maitreya] Right … made by Aniki Seetan.
This is my “artificial leg” and you can get this prosthesis in both left or right leg fittings at the next round of the Cosmopolitan Event, which starts on August 28th. NEW.

LAGOM – Witched Statue [Moss] … made by ZandraSnowpawSnyder Resident. Purchased as part of a two-statue set at The Fantasy Collective in August 2017. NEW.

{BE} Statue of Liberty … made by pokute Burt. Purchased at the current round of Shiny Shabby, which is open from August 20th until September 15th. NEW.
Shiny Shabby – BellEquipe Design Store

The pose that I have used is double take: sting like a bee … made by Valena Vacano.