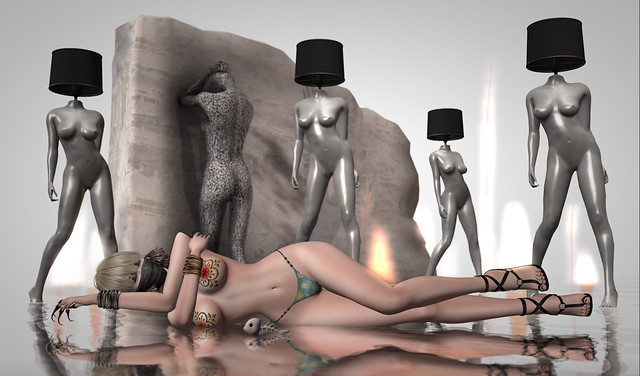 Am I dreaming with the mask or within the mask? Or am I behind the mask or perhaps inside it? Who knows!! 😀

But I do know my fashion details and they are spelt out below.

*barberyumyum*S02(beige) … made by toraji Voom. I purchased this short unisex hair at Hair Fair 2017, which finished back on July 16th. NEW.

{anc} illumination fringe surgical mask.thearcade Dec.2015gift … made by aki69 Resident. This was a gift at the December 2015 round of The Arcade Gacha.

~Nerido~ Summer String (Maitreya)-Sun Pattern … made by Lina Nerido.
I purchased the Summer Bikini at the most recent round of the Cosmopolitan Event, which finished on July 29th. NEW.

fri. – Tania Sandals (Coal) … made by Darling Monday. Available now at the latest round of the Uber event, which is open from July 25th until August 22nd. NEW.
Uber

22769 – Little Glowing Girlfriend – white x 4 … made by Paco Pooley.
I purchased this Copy object at the current round of the monthly Kink(Y)Event, which is open from July 28th until August 19th. NEW.
Kink(Y) Event

The pose that I have used is KaTink – Chuan 07 … made by Maliah Naidoo.