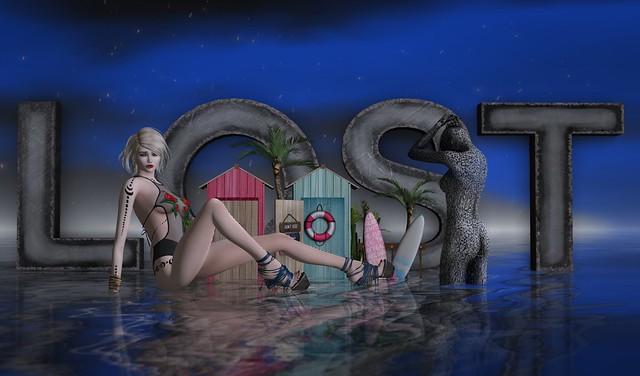 Poor, sad Alles – decked out in this beautiful kit but all alone on some distant foreign shore with only a spirit woman to keep her company!! SAD!! 😦

Amacci Hair – Lani … made by Carina Larsen. Purchased at Hair Fair 2017 which ended on July 16th – I am wearing this hair in a tone from the Blonds Pack. NEW.

Seniha. Azahara Bodysuit // Maitreya … made by Seniha88 Resident. Purchased at the previous round of the Cosmopolitan Event, which was open July 3rd to July 15th. This was a bargain buy for just 199 lindens as that paid for a fatpack with ten different colours and floral options for the top as well – in both sheer and non-sheer. NEW.

Apple Fall Nickel Letters … made by warehousefifteendesigns Resident.
Purchased as a boxed set during the recent Apple Fall sale, I took four individual letters and made the word LOST from them after linking the letters together.

Astralia – Summertime backdrop prop … made by Astralia Resident. This is available now at the latest round of the No21 event, which is open from July 21st until August 12th. NEW.
No21 Event