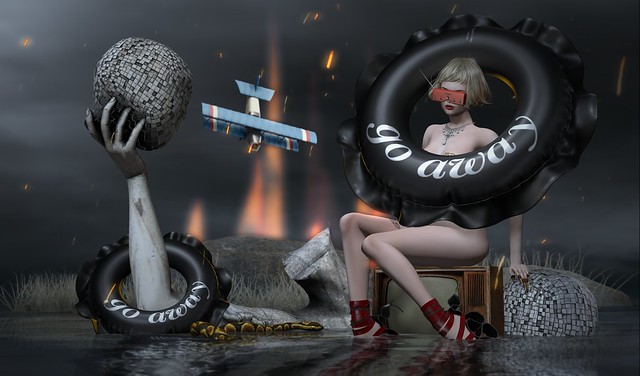 I wanted a holiday in the sun but look what I got instead!! 😦

As for my skimpy worn details, Alles is decked out in the following:

NOMAD // Occular Television (Wider Strap) … made by Piraiyah Novikov. Purchased at the June/July round of Collabor88, which finished on June 6th. NEW.

MG – Necklace – Serena Seashells and Pearls … made by Maxi Gossamer.
You can buy this necklace as well as an accompanying set of anklets and a hip chain at the Maxi Gossamer store inworld as a Fifty Linden Friday item for today only.
Maxi Gossamer @ Cynful

AZOURY – Noun Shoe Red [Maitreya] Metalic Paint Black … made by Aniki Seetan. The Noun shoes are available now at the latest round of The Chapter Four, which is open from July 4th until August 1st. NEW.
The Chapter Four

AF Model Plane … made by the amazingly talented Apple Fall (aka warehousefifteendesigns Resident). I have removed the strings that were once attached to the plane (it was intended to hang from a ceiling). Purchased at the March 2014 round of Collabor88 but sadly no longer available.

[Cb] Two Rocks with Grasses … made by Chic Aeon.

Caboodle – Pool Floaty – Ruffled (rez) x 2 … made by Erovi Resident.
These are a Fifty Linden Friday item today only at the Caboodle store inworld. Available in both rezzable and wear options and in three different colour packs.
Caboodle @ Getsuga