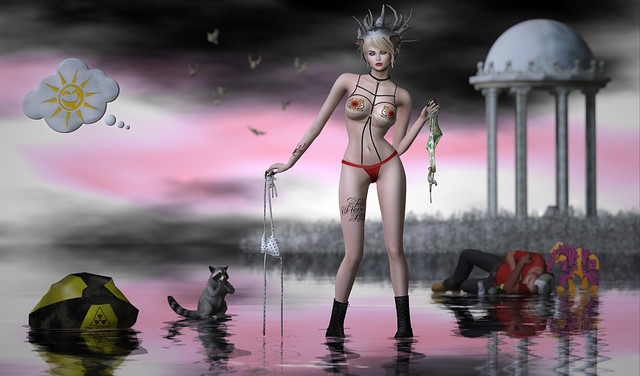 As for my actual fashion details, Alles is wearing the following:

Miamai_LightWarQueenBug Crown_WLRP … made by Pill Kanto. I purchased this rather eccentric item at the November 2014 round of We Love Role-Play but it no longer seems to be available as Miamai shut its inworld store in October 2016 and this item does not appear on their Second Life MarketPlace pages. SAD!!

Tableau Vivant \\ Mallongaj hair … made by M4ri1yn Magic. I am wearing this gorgeous short hair in a tone from the Blonds pack. Available now at Hair Fair 2017. NEW.
Blonde SIM

*U-Design* Prosperity [Maitreya] tattoo … made by foxxiehunie Resident.
Purchased at the Japonica event, which is open from July 1st until July 23rd. NEW.
Japonica

*katat0nik* (radioactive2) Beach Ball, 1Li … made by Katat0nik Pidgeon.
Purchased at Summerfest 2017, which is open from June 30th until July 20th. NEW.
Summerfest ’17