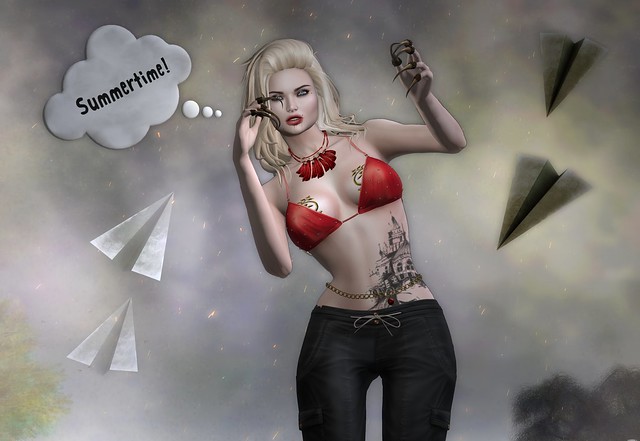 Well possibly not but if I was a whole lot smaller it probably would be fun!! 😀

Tableau Vivant \\ Seashore … made by M4ri1yn Magic. I am wearing this hair in a tone from the Blonds pack. Available now at Summerfest 2017, which is open from June 30th until July 20th. NEW.
Summerfest ’17

Baiastice_Tassell-Red Necklace multiple … made by Sissy Pessoa.
The Tassell set which also includes earrings as well as three versions of the necklace was available at the June 2017 round of The Liaison Collaborative, which finished on June 30th. NEW.

Baiastice_Strass Bikini-Lust-Upper-Maitreya … made by Sissy Pessoa.
The Strass bikini is available right now at Summerfest 2017, which is open from June 30th until July 20th. NEW.
Summerfest ’17

RedFish – Madame Tattoo … made by Souriny Dezno.
I purchased this inked item at The Old Fair, which was open May 4th to May 25th.

fame femme : Orchid BellyChain – Red – Unrigged … made by Clarysa Damiano. Purchased as part of a gold set at the Spring 2016 round of SaNaRae.

UC_Cargo_shorts_black_Maitreya … made by unitedcolorsteam Resident. Available now at the latest round of the Uber event, which is open June 25th until July 22nd. NEW.
Uber

uK – Mystic Dew Mist Gold … made by Poe Rozenberg.
Purchased at the Whimsical event, which was open from May 18th until June 18th. NEW.

The pose that I have used is Bauhaus Movement – Decoded Feedback 46 … made by LouLou Teichmann. The Decoded Feedback set of poses was available at the June 2017 round of The Liaison Collaborative, which finished on June 30th. NEW.