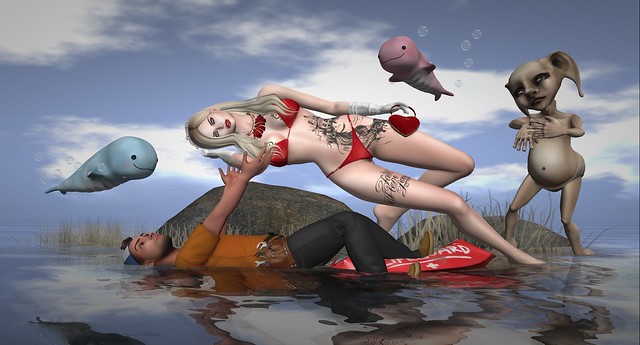 As for my fashion details, Alles is kitted out in the following:

MINA Hair – Emma … made by Mina Nakamura. I am wearing this mid-length hair in a tone from the Blonds pack. The Emma hair and two other styles (Fiona and Luna) will be available at Hair Fair 2017 which begins on July 1st. NEW.

.:::G.ID:::. Hazel Gloves Maitreya … made by Gideon Ormstein.
Purchased at The Vintage Fair event, which was open from June 9th until June 25th. NEW.

TuTy’s – Red Heart Clutch … made by Tutys Resident. I’m holding it in my left hand.

Mutresse-Proud-Mr FixIt RARE … made by Eeky Cioc.
This is a RARE prize for Mutresse at the June 2017 round of The Arcade Gacha. NEW.
The Arcade Shopping Guide – June 2017

*katat0nik* (red / no pose) Lifeguard Swim Ring … made by Katat0nik Pidgeon. Purchased at the latest round of the SaNaRae event, which is open from June 26th until July 18th. NEW.
SaNaRae