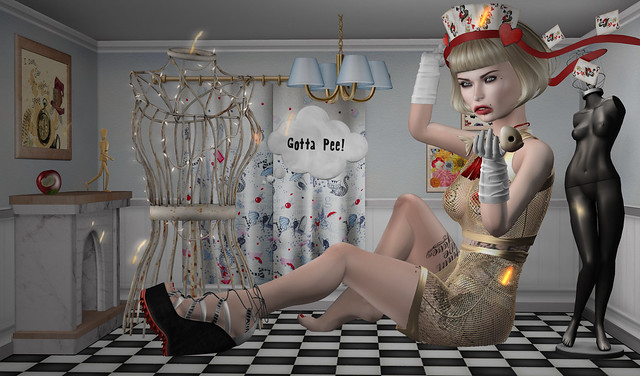 Before the wiry mannequin does something that is really … eww!! 😦

As for my fashion details, poor Alles is wearing the following.

Astralia – Wonderland (Queen’s crown) … made by Astralia Resident. This is a common prize on the Wonderland gacha at the latest round of the Lootbox event, which is open from June 20th to July 20th. NEW.
Lootbox

:::Sn@tch Minx Hair-Unrigged (NATURALS)::: … made by Ivey Deschanel. Purchased at The Vintage Fair event, which was open from June 9th until June 25th. NEW.

.:::G.ID:::. Hazel Gloves Maitreya … made by Gideon Ormstein.
Purchased at The Vintage Fair event, which was open from June 9th until June 25th. NEW.

Pure Poison – Riley Platforms – Maitreya … made by Shaleene Kenin.
The Riley Platforms are available at the latest round of Uber, which is open from June 25th until July 22nd. And yes, I am only wearing one shoe!! NEW.
Uber

Dutchie bitten apple … made by Froukje Hoorenbeek.
Purchased on Second Life MarketPlace in May 2017.
Dutchie mesh apple with a bite taken out

The pose that I have used is Astralia – I’m too big! Pose ❤ … made by Mavi Beck. This is the built-in pose within the Astralia – Wonderland (I'm too big) Background.