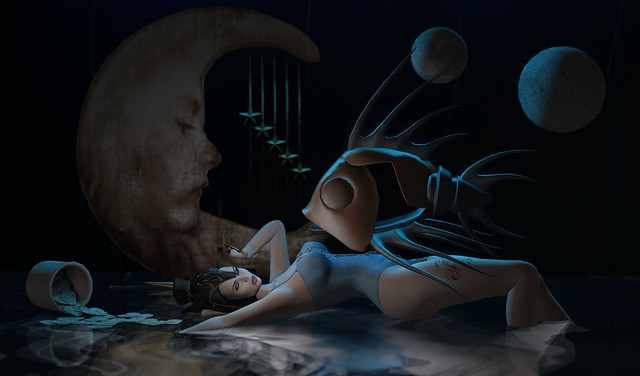 For those who need to know, Rex Hunt was an Australian “personality” who during a career on television as a presenter on fishing shows had a penchant for kissing fish that he would then release back into the water. Poor fish!

Alles – as you can see – is not a bearded middle-aged man – but these are her fashion details.

AZOURY – Bellone Helmet Gold jewellery [Copy&Resize] … made by Aniki Seetan. Available now at the latest round of Shiny Shabby, which is open from June 20th to July 15th. NEW.
Shiny Shabby – AZOURY

fame femme: Laced Swimsuit – Sky – Maitreya … made by Clarysa Damiano. Purchased at the current round of the No21 event, which is open from June 21st to July 12th. NEW.
No21 Event

Meva Claws right golden Maitreya … made by Mea Carnell.
The Meva Claws were first available at The Enchantment event in early 2016 but have now been updated as Meva Bento Claws and are available in fittings for both Maitreya and Vista bento hands.
Meva Bento Claws @ Manifesto

anxiety %subject … made by max1ma Resident.

ANGELIQUE paper hearts … made by Myrrlne Resident.
This was a gacha machine purchase at the current round of the Cosmopolitan Event, which is open June 19th to July 1st. NEW.
Cosmopolitan Event

The pose that I have used is [X] Absence 2 … made by Xerys Resident.