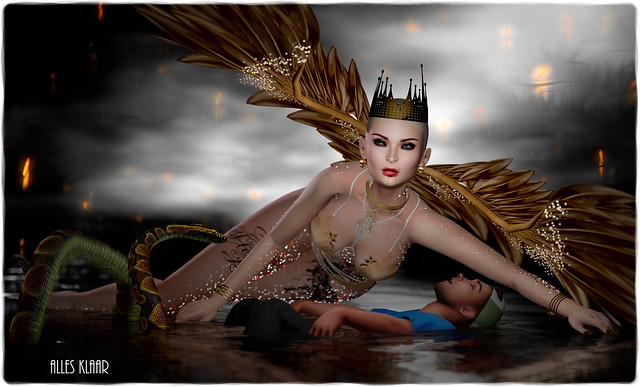 I could have called this blog post “The Man Eater” but I’m hoping that Mister FixIt is already dead cos that way he won’t struggle when I get my fangs into him!! 😀

Nightmare :: Crown of Belial … made by Asylum Miggins. Purchased at the current round of Suicide Dollz, which is open from June 11th to June 22nd. NEW.
Suicide Dollz

.Tableau Vivant \\ Lelutka HB9a – Blonds … made by M4rilyn Magic.
The LeLutka HB9 hairbases by Tableau Vivant along with Mood add-ons are available at the latest round of KUSTOM9, which is open June 15th to July 10th. NEW.
KUSTOM9

GizzA – Posh Bodysuit Wings [Golden] … made by Giz Seorn. The Posh Bodysuit is available now at the latest round of Très Chic, which is open June 17th until July 5th. NEW.
Très Chic

Mutresse-Asleep-Mr FixIt RARE … made by Eeky Cioc.
This is a RARE prize for Mutresse at the June 2017 round of The Arcade Gacha. NEW.
The Arcade Shopping Guide – June 2017