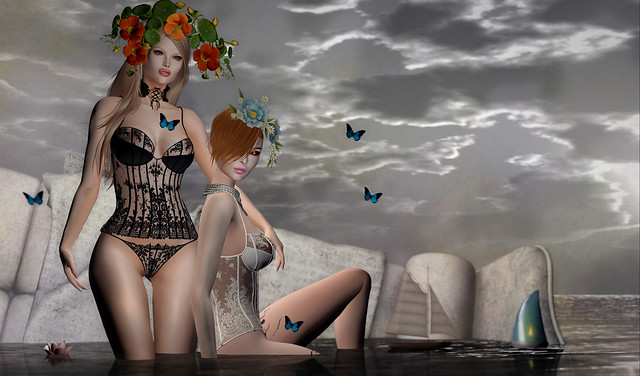 Well here we are, waiting for a rescue from a passing ship!! 😀

LUA – on the left – is wearing the following:

BigBeautifulDoll – ARIANNA Mesh Lingerie Set – Black … made by BigBeautifulDoll Resident. Purchased at the latest round of the Whimsical event, which is open from May 18th through until June 3rd. NEW.
Whimsical

Astralia – Kamalia flower crown … made by Astralia Resident. Available now at the latest round of Shiny Shabby, which is open from May 20th until June 15th. The Kamalia crown has a colour change HUD for both the daisies and the big flowers. NEW.
Shiny Shabby – Astralia

BigBeautifulDoll – ARIANNA Mesh Lingerie Set – White … made by BigBeautifulDoll Resident. Purchased at the latest round of the Whimsical event, which is open from May 18th through until June 3rd. NEW.
Whimsical