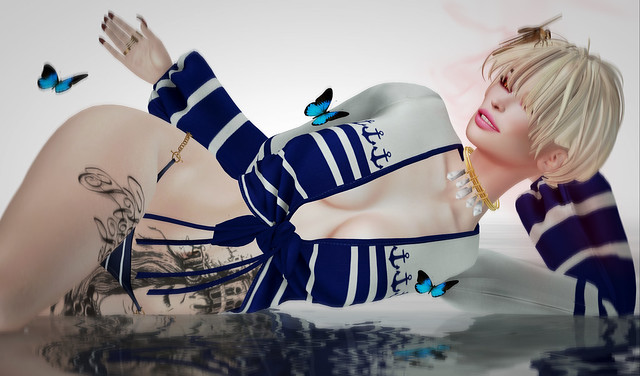 Cos Monday has already been and gone!! 😀

As for my Tuesday fashion details, Alles is wearing the following items:

.Enfant Terrible. Verelis Dragonfly Hair Gift! Gold … by LeEnfantTerrible Resident. The dragonfly was a free gift at the May 2015 round of We Love Role-Play.

:CHEVEUX:M109Hair Blonde1 … made by mariru Catnap. Purchased at the Fourth Anniversary round of The Chapter Four, which was supposed to close on May 21st but is still open today (May 23rd). NEW.
The Chapter Four

LaGyo_Sleek Cuba Necklace – Gold … made by Gyorgyna Larnia.
Purchased at the April/May 2017 round of Collabor88. NEW.

L&B * LARAfit* Swear Zoe Blouse … made by Paul Lapointe. Purchased at the current round of the Uber event, which will finish later today (May 23rd). NEW.
Uber

RedFish – Madame Tattoo … made by Souriny Dezno.
I purchased this inked item at The Old Fair, which is open from May 4th to May 25th. NEW.
The Old Fair

erratic / leffe – bikini bottom / navy-stripes (maitreya) … made by Erratic Rain.
Along with the accompanying bikini top (not worn here), I purchased this at the current round of the Uber event, which will finish later today (May 23rd). NEW.
Uber