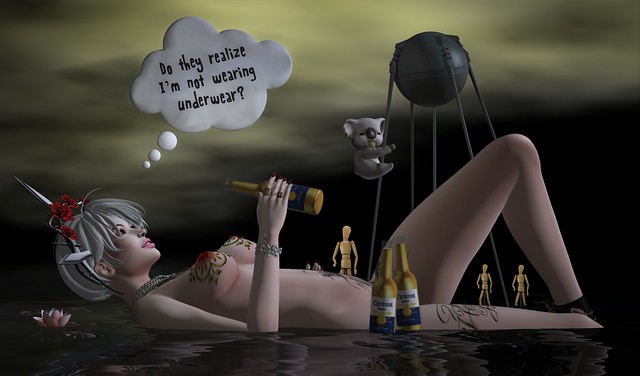 I’m just hoping that the aliens are here for the beer!! 😀

:CHEVEUX:M109Hair black1 … made by mariru Catnap. Purchased at the Fourth Anniversary round of The Chapter Four, which was supposed to close on May 21st but is still open today (May 22nd). And yes, ignore the odd naming of this hair as “black” – it just happens to be part of a greyscale line of this rather cute hair. NEW.
The Chapter Four

RedFish – Madame Tattoo … made by Souriny Dezno.
I purchased this inked item at The Old Fair, which is open from May 4th to May 25th. NEW.
The Old Fair

Pure Poison – Elli Sandals – Maitreya … made by Shaleene Kenin. These are available at the current round of KUSTOM9, which is open May 15th to June 10th. NEW.
KUSTOM9

220ML – Chronos Beer [Bottle Open] – rezzed by me x 2 … made by Jonas Acanthus. This is a TCF group gift at the Fourth Anniversary round of The Chapter Four, which was supposed to close on May 21st but is still open today (May 22nd). NEW.
The Chapter Four

And lastly, the pose that I have used is Girl Fever 09 … made by Mavi Beck, however I made the pose horizontal rather than vertical as it was originally. And then, yes – I grabbed a beer too! 😀