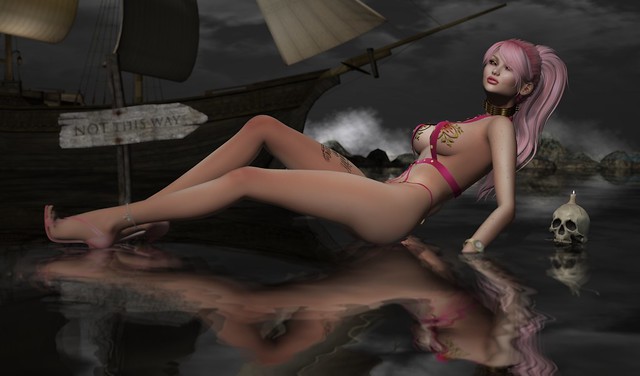 Well, that much is true I guess!! xD

MINA Hair – Inkie [Big ponytail] … made by Mina Nakamura. This pink hair is a common prize on the MINA gacha machine at the latest round of The Epiphany, which is open until May 15th – and yes, I’m wearing a tone from the Pastels pack. NEW.
The Epiphany

-David Heather-Danja Choker/Gold … made by Gianni Broda.
Purchased at the first round of Collabor88 for 2017 – it is now available instore.
David Heather – Danja Choker

Baiastice_Circle Jewerly-Onix-Watch … made by Sissy Pessoa.
The Circle Jewelry Set was available at the previous round of The Liaison Collaborative, which finished on April 30th. NEW.

fri. – Rita Sandals (Tulip) … made by Darling Monday.
Available now at the current round of Collabor88, which finishes on May 6th. NEW.
Collabor88

Construct – Skull and Candle – 1 li … made by Cat Carfagno.
This was a third anniversary gift at the Cosmopolitan Event in September 2015.

The pose that I have used is Amitie -The Pool – 02 … made by BELEN Ackland.
(This pose was slightly modified by me using my Animare HUD).
Amitie Poses