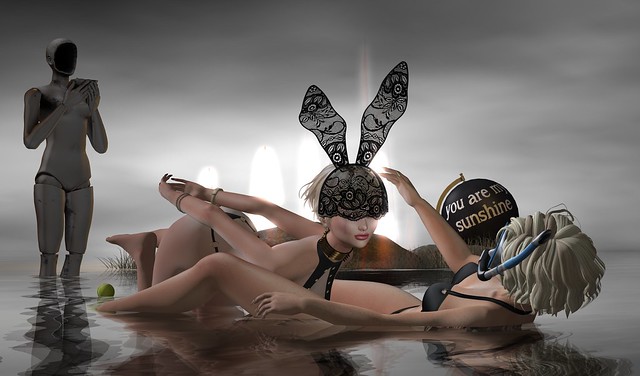 ALLES – on the “top” – is wearing the following:

[Avenge] Bunny Lace mask – black … made by AvengeStore Resident.
Purchased at the March/April round of the monthly Kink(Y) Event. NEW.

Tableau Vivant \\ Aku hair … made by M4ri1yn Magic. I am wearing this lovely short hair in a tone from the Blonds pack. First available at the April/May 2016 round of Shiny Shabby, Aku is now available instore.
Tableau Vivant – Aku Hair

-David Heather-Danja Choker/Gold … made by Gianni Broda.
Purchased at the first round of Collabor88 for 2017 – it is now available instore.
David Heather – Danja Choker

BEWITCHED – on the bottom – is wearing the following:

[monso] My Hair – Min /Light Blonde … made by Morphine Jack.

UC_Taka_Top_black_Maitreya … made by unitedcolorsteam Resident. This is available at the current round of Uber, which is open from April 25th until May 22nd. NEW.
Uber

Zaara : Morjim bikini bottom (maitreya) … made by Zaara Kohime. This was a RARE gacha item from the June 2015 round of The Arcade Gacha.

RO – Spook Show – Val Vain Mannequin … made by AxsisThorn Resident. Purchased as a gacha item at the anniversary round of The Epiphany event in August 2016.

Astralia – Single Tennis ball (wear) … made by Astralia Resident. This was rezzed by me instead. The tennis ball is part of the Astralia – Tennis Collection which is available at the current round of Shiny Shabby, open from April 20th to May 15th. NEW.
Shiny Shabby – Astralia

The two-person pose that we used for this picture is -Narcisse- The Slap FF … made by Narcisse Constantine. This pose is available now at Pose Fair 2017, which closes today (April 29th). So it’s best to hurry on down to the event to get it. NEW.
Pose Fair 2017