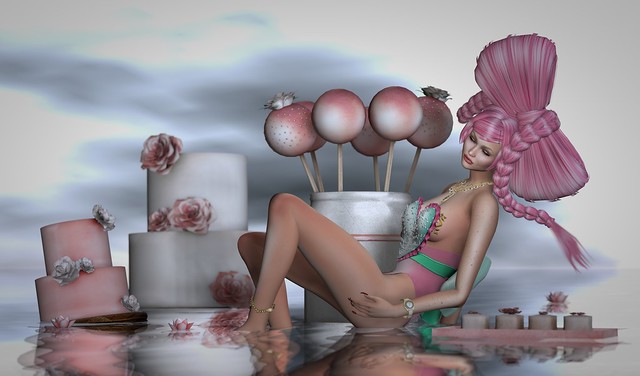 Or so I have been told!! That aside, Alles is wearing the following:

*BC322 Star fest Pink(C) hair … made by Komari Mai. I would imagine that this hair is now is no longer available as the store links on Komari’s avatar profile no longer work – and yes, I did buy it almost seven years ago.

MINIMAL – Tysa Necklace -Gold- (Modify) … made by Ors Quan.
Purchased at the recent round of the Uber event, which finished on April 23rd. NEW.

Astralia – Lulu Bodysuit … made by Astralia Resident. This will be available at the Secret Hideout event which starts on May 1st. NEW.
(This bodysuit has 7 very cute colours and the fatpack has a colour HUD to mix and match the different shades).

The pose that I have used is Bauhaus Movement – Yuno … made by LouLou Teichmann. However I modified this pose by using my Animare HUD. This pose is part of a Hildegarde Female Poses set that was first available at Shiny Shabby in January 2016.