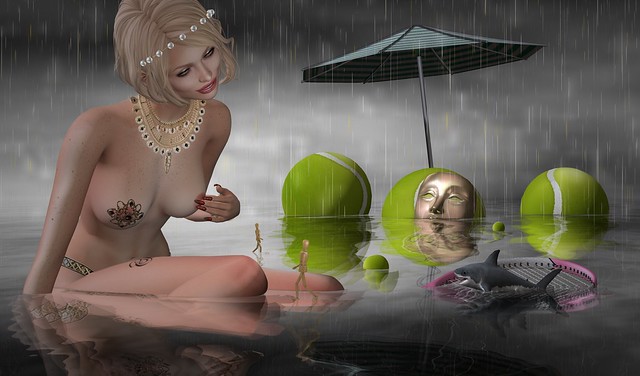 And the big tennis event in London hasn’t even happened yet!! Oh dear!! 😦

Poor Alles is not a big fan of tennis and recalls that the last time that she played the green-ball game was a few hit-and-giggle affairs at college far too many years ago to remember. Needless to say, I don’t think I ever got the ball over the net!!

But in Second Life, Astralia and a number of other creators have got together to give us the best tennis experience evah in our virtual world. From the Astralian side there are rackets, tennis balls and other accessories while Dead Dollz has made a Smash Tennis Dress – which Alles conveniently forgot to wear! Ooops!! 😀

However Alles did manage to kit herself out in the following:

+elua+ Odette_Lightblonde [unrigged1] … made by Miu Edelman.
Purchased at the most recent round of the Uber event, which finished on April 23rd. NEW.

MINIMAL – Tysa Necklace -Gold- (Modify) … made by Ors Quan.
Purchased at the most recent round of the Uber event, which finished on April 23rd. NEW.

The pose that I have used is Bauhaus Movement – Razorblade Remix 29 … made by LouLou Teichmann. This is part of a 50-pose set that was first available at the December 2016 round of The Liaison Collaborative.