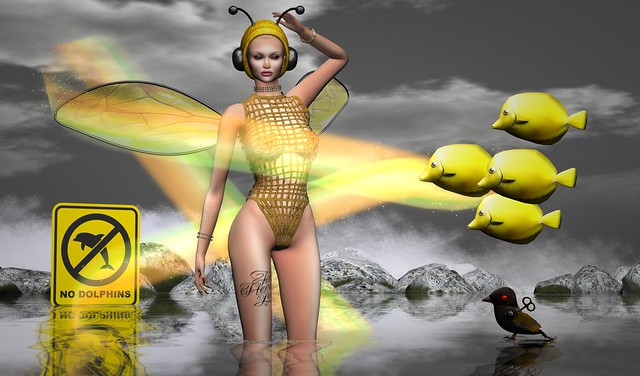 And why wouldn’t I want to be pretty and stand out from the Bombus crowd – when one source online describes your average bumblebee as being “large, fat and very hairy”. Eeek … that’s not how Alles sees herself at all!! 😛

As for her fashion details, Alles is wearing the following:

[sYs] CAGE bodysuit (Maitreya body) – gold … made by Syane Cisse.
The CAGE bodysuit was initially available at the recent round of the Kink(Y) Event, that finished on April 19th – but you can get it now at Shiny Shabby, which is open until May 15th. NEW.
Shiny Shabby – [sYs] Design

No Dolphins Allowed Sign – Yellow … made by Photon Pink.

+Half-Deer+ The Mad Scientist’s Bird – Iron-Yellow … made by Halogen Magic.

And lastly, the pose that I have used is Kirin – Summer Pose 5 … made by Carolina Sautereau.