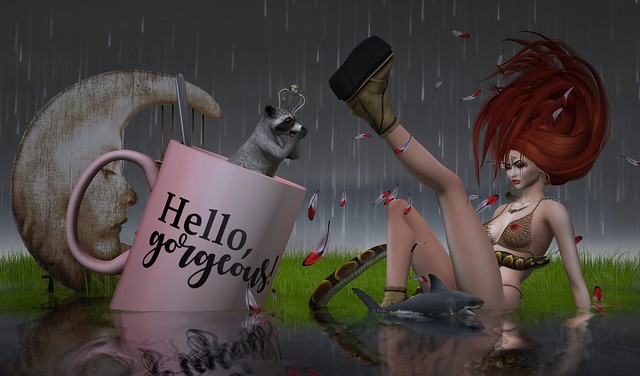 Yet all I wanted to do was to stay … forever young!! 😦

Akemi Collar … made by Zib Scaggs. The Akemi Jewelry Set includes the collar and a set of matching earrings. Purchased at the current round of the Très Chic event, which is open from February 17th until March 5th. NEW.
Très Chic

**RE** Aletta Watch Necklace … made by crashnoww Resident. Purchased at the most recent round of the Cosmopolitan Event, which finished on February 25th. NEW.

Persefona Floating Feathers 9 (rotation) MB (red) … made by Persefona Resident. Purchased at the most recent round of the Cosmopolitan Event, which finished on February 25th. NEW.

Baiastice_NeOkobo Shoes-Gold-Maitreya … made by Sissy Pessoa. The NeOkobo shoes are available now at the latest round of the Uber event, which is open from February 25th until March 22nd. NEW.
Uber

Astralia – Bish crown … made by Astralia Resident. And yes, the raccoon is wearing it instead of me.

And lastly, the pose that I have used is Pose It-Extend … made by Sirenity Soon.