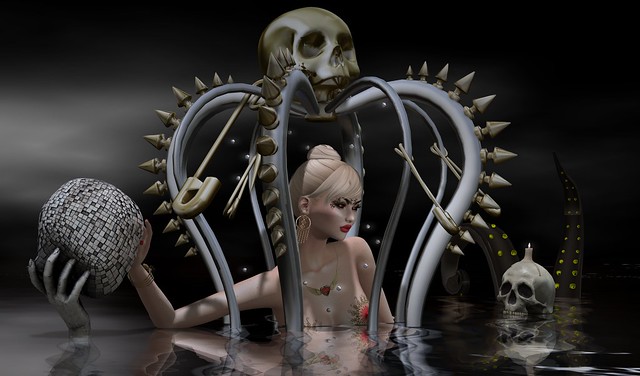 As some of you probably know, there are several monthly “box releases” now available in Second Life. The general premise is that you sign up to get the contents of the box – sight unseen but the designers are known – before a certain date at a reduced price. And then once that date has arrived on the calendar, the box is delivered to you – or if you didn’t sign up for it before the due date, you can still get the box but at a regular price which is generally about twice what a sight unseen box would have cost.

Anyway, one of these box releases is BishBox, which has been up and running since November 2016. The final sign-up date for this month’s “mystery crate” was February 19th but if you missed that date you can still get it at BishBox headquarters until the end of this month (and beyond) for 3,000 lindens.

Astralia – Bish crown … made by Astralia Resident. This should have been worn on my head but I made it very LARGE and kinda imprisoned myself within it. The crown is one of fifteen unique items that are still available in the February 2017 edition of the BishBox crate of goodies. NEW.
BishBox Headquarters

baby Kraken in a barrel … made by minnie Tunwarm. Purchased on Second Life MarketPlace in February 2016.
Kraken in A Barrel

And lastly, the pose that I have used is Bauhaus Movement – Imperium In Imperio … made by LouLou Teichmann.