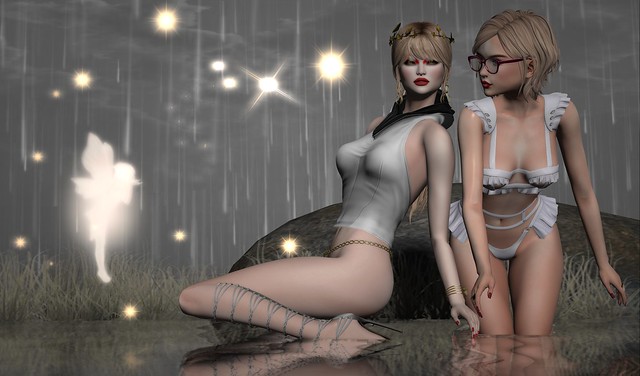 MINA Hair – Helen (materials) … made by Mina Nakamura. I am wearing this hair in a tone from the light blond pack. First available at Hairology in February 2016.
MINA Hair

UC_Corina_Top_white_Maitreya … made by unitedcolorsteam Resident. This is part of the UC_Corina_Gown that is currently available at the latest round of Uber, which is open from January 25th until February 22nd. NEW.
Uber

DORA – on the right – is wearing the following:

[PM]Pixel Mode – Fairy Kiss COMMON … made by Tya Fallingbridge. Purchased as a gacha item at the Indie Teepee event in July 2016.

Lastly, we used two single poses to make this picture. The pose that Alles used is Bauhaus Movement – Liquid Hater 51 (AD pose) … made by LouLou Teichmann. However I slightly altered my pose by using my Animare HUD. And the pose that Dora used is Bauhaus Movement – Liquid Hater 35 … also made by LouLou Teichmann. Both poses were purchased as part of a Liquid Hater pose set at the latest round of The Liaison Collaborative, which finishes on January 30th. NEW.
The Liaison Collaborative