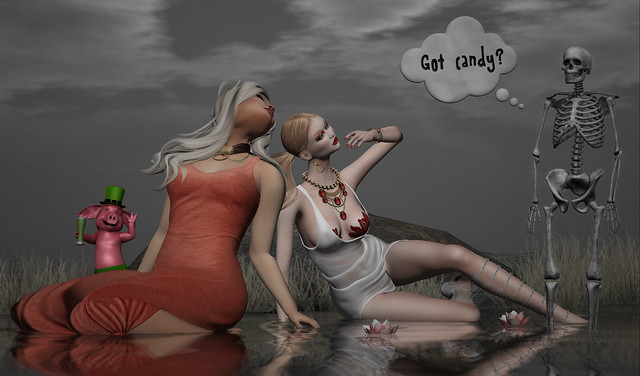 Meva Baca Collar Gold … made by Mea Carnell. This was available at the first round of the Cosmopolitan Event for 2017, which finished on January 15th. NEW.

Scandalize. Plastic.Lara … made by Yanikka Resident. Purchased at the latest round of the Kink(Y) Event, which is open from January 28th until February 19th. NEW.
Kink(Y) Event

CURELESS [+] Skeletal System / PURE … made by

Lastly, we used two single poses to make this picture. The pose that Skye used is Bauhaus Movement – Liquid Hater 51 (AD pose) … made by LouLou Teichmann. And the pose that Alles used is Bauhaus Movement – Liquid Hater 41 … also made by LouLou Teichmann. However I slightly altered my pose by using my Animare HUD. Both poses were purchased as part of a Liquid Hater pose set at the latest round of The Liaison Collaborative, which finishes on January 30th. NEW.
The Liaison Collaborative