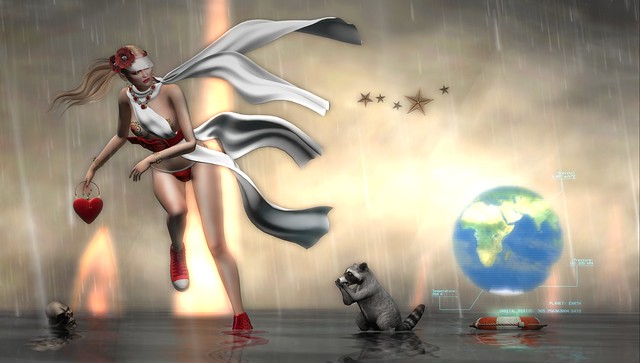 Or is it the “Idiot Grin” that we are up against? Either way it’s an ignoramus who thinks that global warming is a “Chinese invention”. 😦

Astralia – Michelle Sunshade (red/silver) … made by Astralia Resident. This is one part of the Michelle set that is available now at the latest round of the No 21 event, which is open from January 21st until February 12th, 2017. NEW.
No. 21 Event

Bauhaus Movement – Federica Necklace 1 … made by LouLou Teichmann. Purchased as part of a Federica set in Red at the current round of Shiny Shabby which is open from January 20th until February 15th. NEW.

[LeLutka]-EDITORIAL scarves/Rbelt … made by Thora Charron.
Purchased way back in December 2011 and unfortunately no longer available.

TuTy’s – Red Heart Clutch … made by Tutys Resident. I am holding it in my outstretched right hand. Available at TuTy’s Apparel inworld and it’s a freebie!! 😀
TuTy’s Apparel

Baiastice_Starlight Sneakers-Red-Maitreya … made by Sissy Pessoa. The Starlight sneakers – in twenty different colours and textures – are available now at the current round of Collabor88, which is open from January 8th until February 6th. NEW.
Collabor88

~isil~ Planetarium Hologram (Earth) COMMON … made by Isilmeriel Resident.
This cool item was a “prize” from the ~isil~ vendor at the December 2016 round of The Arcade Gacha. NEW.