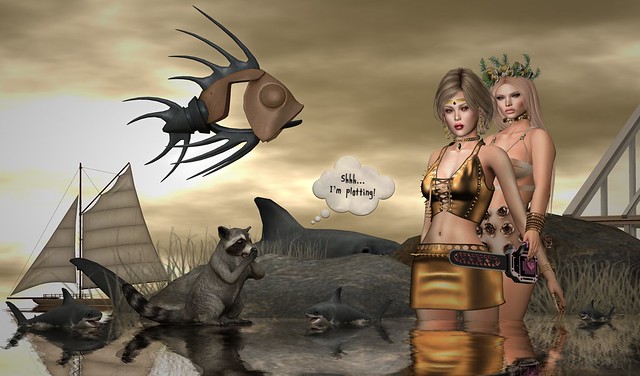 ALLES – at the front – is wearing the following:

MINA Hair – Anika rigged (materials) … made by Mina Nakamura. For the Black Friday sale which finishes at MINA Hair on November 27th, all items will be 30% off the normal price.
MINA Hair

MISCHA – at the rear – is wearing the following:

.Entwined. Laurel / Light Blondes … made by VivienMarli Resident. This hair is available now in nine different packs at the current round of Shiny Shabby, which is open from November 20th until December 15th. NEW.
Shiny Shabby – Entwined

Mischa is also “holding” this object: Astralia – Hearts Chainsaw … made by Astralia Resident. However I rezzed this object from my Inventory and moved it into position. Purchased at the Astralia Mainstore on November 25th, during a 24-hour Black Friday sale. But if you missed that quick sale, it is still available here.
Astralia Mainstore – Props and Roleplay

[Cb] Two Rocks with Grasses … made by Chic Aeon. This is part of a Rocks and Plants Set that I purchased at the Cosmopolitan Event in early October 2016. NEW.

The two-person pose that we used is RK Poses. Bystander