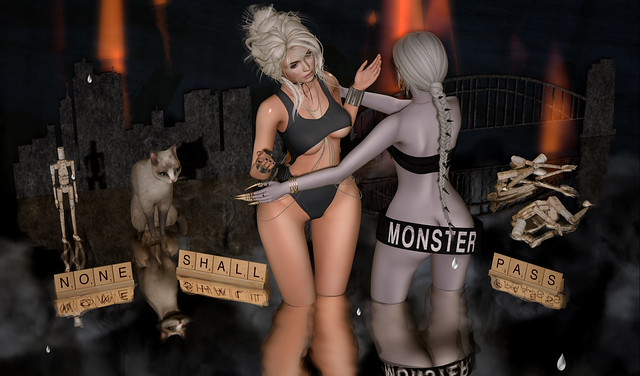 If you look closely at this picture you can see the “skyline” of the beautiful city that I live in – Sydney, Australia. If my city was in flames would the world stand by and say NO to refugees from Australia. I sincerely doubt it. So why is it OK for the world to say NO to refugees from Syria, where cities like Aleppo and others really are on fire?

[Perhaps America should be reminded as it puts an iPhone to its collective ear or raises it in an outstretched hand to take a selfie, that the biological father of Steve Jobs – Apple’s founder – came from Syria and was, quelle horreur, a Muslim.]

Anyway, the fashion details for the two of us are below.

#Foxy – Drogon. (L) hair … made by Liza Broono. Purchased at the current round of Hairology, which is open from November 10th until November 30th. NEW.

Kaithleen’s Barbed Wire Choker for HER … made by Zlyskritek Resident. Purchased at the previous round of the Cosmopolitan Event, which was open from October 24th until November 5th. NEW.

TABOU. Chest bandage- BLACK- Maitreya … made by glamSOglamour Resident. Purchased at the latest round of Enchanted, which is open from November 12th until November 30th. NEW.
Enchantment

#Foxy – Wide Velvet Choker ‘Monster’ (Gold) … made by Liza Broono. This is not being worn as a choker though! First I rezzed a copy of it and then enlarged it, took it back into my Inventory and then added it to the attachment point for my stomach, turned it around so that the MONSTER was now on the rear side of my body … and voila, I was wearing it as a skirt.

JASstore Skybox – The Blue Room WITH RAIN … made by Jasmine Lisle.

(fd) Cat – 11 Sitting … made by Toast Bard. The (fd) Posed Cats collection was originally available at the September 2014 round of The Arcade Gacha, but are now available on a gacha board instore at the (fd) store in Tableau.
Posed Cats Gacha Board

While it may look as though our setup is a two-person pose, we actually used two single poses to make this picture. The pose that Elemiah used is [X] Akane 1 … made by Xerys Resident. And the pose that Alles used is Pose It-Wind Blown … made by Sirenity Soon.

The Akane pack is available in the XXY Poses Mainstore on a vendor stand which also includes poses in the Aloha Hula pack and the Madoka pack.
XXY Poses – Akane Pack

3 thoughts on “In Trump’s World There is No Compassion”