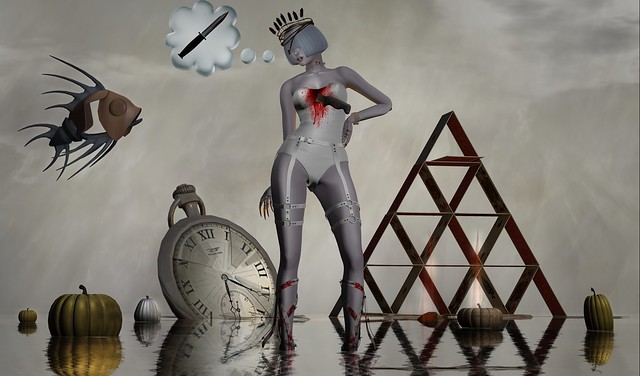 aa*Hair – ITOI … made by Fawn Kelberry. I am wearing this Asian-styled bob in a tone from the Blonde/Beige pack. Purchased at the Halloween Market Town in the Ryukyu SIM (Panic of Pumpkin in Okinawa), which finished on October 31st. NEW.

Kaithleen’s Barbed Wire Choker for HER … made by Zlyskritek Resident. Purchased at the current round of the Cosmopolitan Event, which is open from October 24th until November 5th. NEW.
Cosmopolitan Event

Bloody knife … made by Precious Restless.

grim bros lighting bolts SPINE … made by Cutea Benelli. Purchased aeons ago in September 2011 but … still available inworld or on MarketPlace.
Lightning Bolts Spine on MarketPlace

The pose that I have used is Girl Fever 08 … made by Mavi Beck.