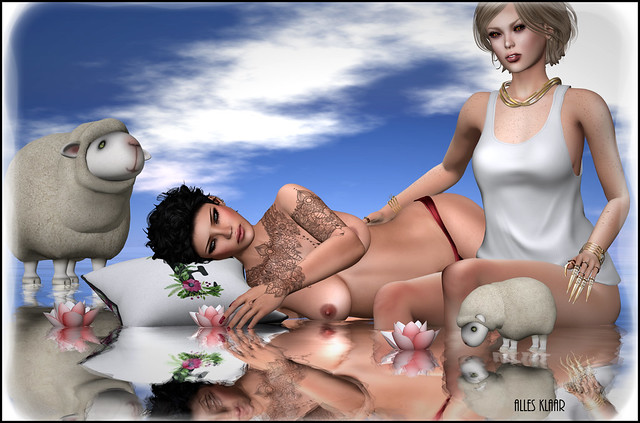 Well a nativity scene on a budget, I guess you could say!! 😀

ALLES – on the right – is wearing:

MINA Hair – Anika unrigged (materials) … made by Mina Nakamura. I am wearing this short hair in a tone from the Dark Blonds pack. The Anika hair is available at the latest round of The Epiphany, which is open October 15th to November 15th. NEW.
The Epiphany

*AvaWay*_Elvira_Necklace … made by Avaway Resident.
Purchased as part of the Elvira Jewelery Set at the current round of Très Chic, which is open from October 17th until November 10th. NEW.
Très Chic

d-lab- Chair-sheep02 … made by dazai Voom. The D-LAB Chair Sheep were originally a Fifty Linden Friday item but can still be purchased inworld.
D-LAB – Chair Sheep

d-lab- Chair-sheep03 … made by dazai Voom. This is the very small sheep in front of Alles – because it is a Copy/Modify object I was able to greatly reduce it in size. The D-LAB Chair Sheep were originally a Fifty Linden Friday item but can still be purchased inworld.
D-LAB – Chair Sheep

We used two individual poses to make this scene. The pose that Elo used is called Pose It-Water-Calm … and is made by Sirenity Soon. This was first available as part of a pose set at the April 2016 round of the On9 event. But you can now find it at the Pose It store inworld – it is one of the Spring Poses set, that is on the left-hand side of the store.
Pose It Poses