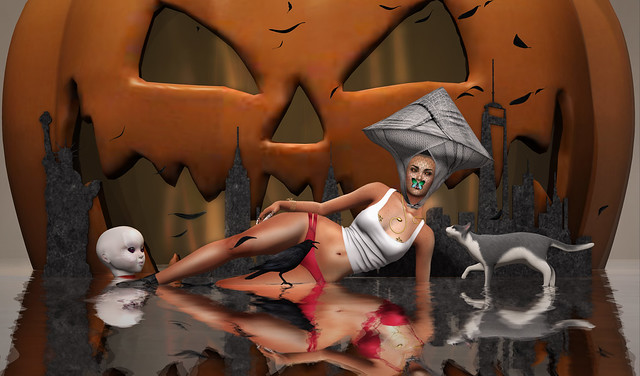 As for fashion details, Alles is kitted out in the following:

Miamai_KukiHat – Artic … made by Pill Kanto. Purchased at the Shiny Shabby event in early April 2016. As I mentioned at Flickr, the Miamai store inworld will be closing on October 24th and the Kuki Hat and MiniDress are still available there.
MiaMai @ Peridot Island

LaGyo_Ophelie Veil – Green and Butterfly … made by Gyorgyna Larnia. Purchased at the current round of Collabor88, which is open from October 8th until November 6th. NEW.

Maitreya Mesh Body Lara – Shape 2 … made by Onyx LeShelle. I have tweaked this shape so that my hands are smaller (10) and my hips are wider (78).

erratic / kira – bikini top / red (maitreya) … made by Erratic Rain.
This is worn by the reflected Alles in the bottom part of the picture!

Baiastice_Bea Doll Head … made by Sissy Pessoa. The Bea Doll Head is a group gift for Baiastice this month and can be worn as a mesh head! NEW.