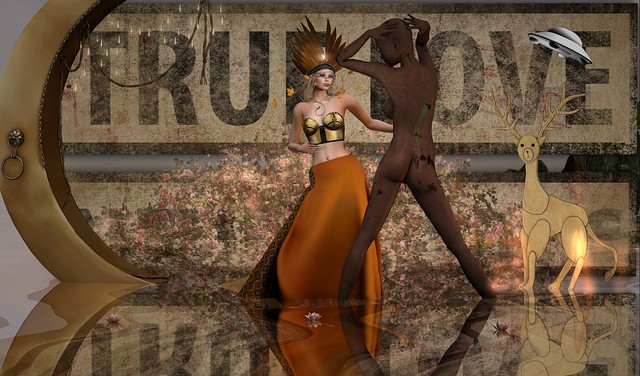 As for fashion details, Alles is wearing the following.

MINA Hair – Minea 01 (materials) … made by Mina Nakamura. Available now at the latest round of Shiny Shabby, which is open from September 20th to October 15th. This product is a collaboration between MEVA and MINA Hair. NEW.
Shiny Shabby – MINA Hair

Persefona Wheat in mouth (gold) … made by Persefona Resident. Purchased at the current round of the Cosmopolitan event, which is open from September 12th until September 24th. NEW.
Cosmopolitan Event

StrawberrySingh.com – Indira Shape S Standard Size … made by Strawberry Singh. Modified by me – the hands are set at 10, my shoulders are at 70, breasts are 52, hip width is 65 and my belly is rather flat. Purchased on MarketPlace in July 2015.

GizzA – Oriana Bustier [Metallic Gold] Maitreya Lara … made by Giz Seorn. Available now at the September round of On9, which is open until September 28th. NEW.
On9

PREY – Amera Skirt XS … made by Adriel Huntress. I purchased the Amera outfit, of which the headpiece and the skirt are just part, at the last round of the Color Me Project, which finished on September 20th. NEW.

-Garden- by anc “secret garden” ROSE {goth/Secret}gazebo5p … made by aki69 Resident. This is part of the -Garden- by anc “secret garden” ROSE {goth/Secret} set and was purchased at the August/September round of Collabor88. NEW.
Update: All of the -Garden- sets are now available at the {anc} store inworld.
Art Named Capering aka a.n.c Ltd.

Sculpted Fire (linked by me) … made by TerdNerd Barbosa.

The pose that I used is *PosESioN* Vintage Her 3 … made by Dahriel Resident.