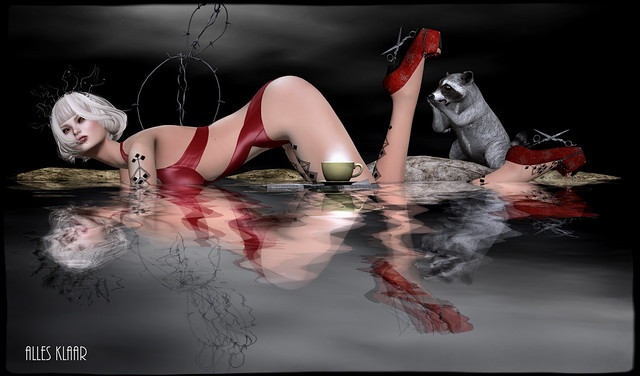 Isn’t almost always the way … I just can’t seem to get rid of these pesky virtual animals who want to butt into my photoshoots!! 😀

As for her fashion details, Alles is wearing the following:

Blueberry – One Piece Swimsuit – Maitreya … made by Blueberryxx Resident.

AZOURY – Xenius Heels Red [Maitreya] … made by Mayhem Seetan. The Xenius heels are an exclusive item which are available in six different colours at the Fetish Fair 2016, which is open from August 19th until September 2nd. NEW.
Fetish Fair

LISP – Mesh – Newspaper and Coffee – Lemon with steam 2li … made by Pandora Popstar.

Mutresse-Cheeky Raccoons-Gasping … made by Eeky Cioc. This was a gacha prize from the September 2015 round of The Arcade Gacha but you can still get members of the Raccoons set at Mutresse on an instore gacha machine.
Mutresse – Gacha Machines

The pose that I have used is ground 01 … made by Weronika Pobieski. This pose is part of a Frozen – Ground poses set that I purchased in February 2016.

One thought on “Rocks, Scissors and Morning Coffee”